Kelly Guthrie Raley has been teaching for 20 years and currently educates kids at Eustis Middle School in Lake County, Florida. Just last month she was named the 2017-2018 Teacher of the Year.

The day after the horrific shooting that took place at Marjorie Stoneman Douglas High School in Parkland, Florida, she posted a rant on Facebook that has since gone viral. In the post, she talked about parental responsibility, compassion, and respect…and more than 823,000 people have “liked” the post and agreed with it, while more than 649,000 have shared it with others.

Here’s what Mrs. Raley had to say:

Okay, I’ll be the bad guy and say what no one else is brave enough to say, but wants to say. I’ll take all the criticism and attacks from everyone because you know what? I’m a TEACHER. I live this life daily. And I wouldn’t do anything else! But I also know daily I could end up in an active shooter situation.

Until we, as a country, are willing to get serious and talk about mental health issues, lack of available care for the mental health issues, lack of discipline in the home, horrendous lack of parental support when the schools are trying to control horrible behavior at school (oh no! Not MY KID. What did YOU do to cause my kid to react that way?), lack of moral values, and yes, I’ll say it-violent video games that take away all sensitivity to ANY compassion for others’ lives, as well as reality TV that makes it commonplace for people to constantly scream up in each other’s’ faces and not value any other person but themselves, we will have a gun problem in school. Our kids don’t understand the permanency of death anymore!!!

I grew up with guns. Everyone knows that. But you know what? My parents NEVER supported any bad behavior from me. I was terrified of doing something bad at school, as I would have not had a life until I corrected the problem and straightened my ass out. My parents invaded my life. They knew where I was ALL the time. They made me have a curfew. They made me wake them up when I got home. They made me respect their rules. They had full control of their house, and at any time could and would go through every inch of my bedroom, backpack, and pockets, anything! Parents: it’s time to STEP UP! Be the parent that actually gives a crap! Be the annoying mom that pries and knows what your kid is doing. STOP being their friend. They have enough “friends” at school. Be their parent. Being the “cool mom” means not a damn thing when either your kid is dead or your kid kills other people because they were allowed to have their space and privacy in YOUR HOME. I’ll say it again. My home was filled with guns growing up. For God’s sake, my daddy was an 82nd Airborne Ranger who lost half his face serving our country. But you know what? I never dreamed of shooting anyone with his guns. I never dreamed of taking one! I was taught respect for human life, compassion, rules, common decency, and most of all, I was taught that until I moved out, my life and bedroom wasn’t mine…it was theirs. And they were going to know what was happening because they loved me and wanted the best for me.

There. Say that I’m a horrible person. I didn’t bring up gun control, and I will refuse to debate it with anyone. This post wasn’t about gun control. This was me, loving the crap out of people and wanting the best for them. This was about my school babies and knowing that God created each one for greatness, and just wanting them to reach their futures. It’s about 20 years ago this year I started my teaching career. Violence was not this bad 20 years ago. Lack of compassion wasn’t this bad 20 years ago. And God knows 20 years ago that I wasn’t afraid daily to call a parent because I KNEW that 9 out of 10 would cuss me out, tell me to go to Hell, call the news on me, call the school board on me, or post all over Facebook about me because I called to let them know what their child chose to do at school…because they are a NORMAL kid!!!!!

Those 17 lives mattered. When are we going to take our own responsibility seriously? Guns aren’t the problem. The current culture is the problem. 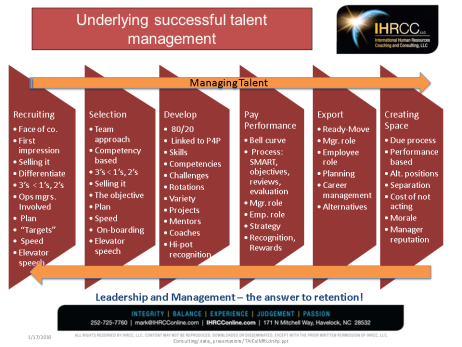 If you are a manager with reporting employees, Developing Talent is an integral part of the job.

If you are a professional reporting to a supervisor or manager, the information below a good check list to assess if the boss and the company are concerned about your future.

If you are interviewing for a position, you might consider using this information in an interview as a guide to see if the company is going to help develop your career.

Developing people is one of the greatest contributions a manager can make for reporting professionals.  It is a great experience to see an employee develop and grow a career to greater heights.   In a prior post, “The Leader – Manager 80/20 Balance”, was discussed (Feb. 17, 2018).  Developing Talent is part of that 20%.  Talent Development actions follow (it is not an inclusive list):

Attend to Skills & Competencies for the short and longer range, particularly competencies.

Create Challenges in the position’s work to build diversity in the work, and develop creativity and problem solving ability.

Use Rotational Assignments to keep it interesting, provide variety, and broaden perspective.

(Rotations and projects also create visibility in the organization and help develop future opportunities for those who have the runway).

Arrange for Mentors to provide another voice and listening alternative.

Use Recognition — so powerful – especially in the presence of co-workers.  There are so many forms: small mementos (desk pieces, plaques), company news, on site luncheons, cookouts, bonuses, training programs, verbal comments, cards or notes, industry conferences, customer visits, etc.  Think of involving higher levels of management when appropriate. Consider formalizing recognition process to encourage use and help maintain consistency in use across the organization.

It is not all about money… many forms of recognition can be creative forms costing little.

Training and Development are not the same.

Compensation is important but it is not the only motivator – in the absence of development, careers stagnate and loss of talent can follow closely behind.

I read through this article and in the end it was not a Doomsday forecast.  It did offer some views that were worrisome.  Views that I believe should cause us some concern…views that cast the USA as moving more toward isolating itself economically from the world economy.

And less than a week prior to this posting, the media reported the USA is considering tariffs on steel and aluminum.

It is a world economy. And the world probably will not care if the USA opts to isolate itself.  Some of the largest world economies are forging trade pacts with each other to build their economies.  Their governments have the foresight to see the benefit.

It is this blogger opinion that Washington needs to get out of its own way, abandon its severe case of tunnel vision, and enthusiastically charge into building trade pacts and agreements with countries across the globe.

This blogger considers our country’s leadership a great example of leadership failure.

Apologies for taking the blog into the political realm…

No posting on this blog for some days — just back from the Hard Rock (HR) Resort and Casino in Punta Cana, Dominican Republic.  HR has done a great job linking the resort to its name sake, Rock music.

Stuff that belonged to current and past rock stars and the music genre is all over  to include motorcycles, hot rods,

guitars, show costumes and paraphernalia , live shows, painted instruments on buildings, it is a long list, right down to tiny embroidered guitars on the pillow cases.

Michael Jackson Show: I have seen a few resort shows in the past and they are OK.  The MJ show … well, you would have thought you were watching the dancing real deal.

The resort was huge but because of building layout and design, you would never know the HR’s 1700+ rooms were full.

It’s an all-inclusive, so it’s all covered if one stays out of the casino and spa.

Lastly the spa, located under the main building, is beyond description – size, design, atmosphere, you would have to see it… nothing short of cavernous!

And of course HR’s namesake music is everywhere.

For someone to lead and inspire you,

For the boss to recognize you,

For customers to thank you,

For coworkers to help you,

For the world to hail you,

They are all just sitting there,